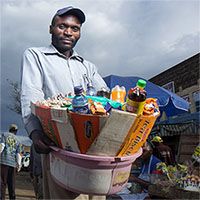 The street vendors are sometimes a bit pushy, especially when they appear in bulk, such as around a Matatu station. As a Stargardtien, I have a built-in “deterrent”.

And once again a street vendor comes up to me, a number of trousers over his arm or with a box full of small items that I can't really see. He clearly heads for me and is about to speak and announce his merchandise. I look at him and prepare to politely decline his offer because I really don't need new pants or some candy. And then he suddenly turns away from me and walks on in a different direction. Has he identified a better customer?
After this happened to me two or three times, I realized where the problem might be. I looked directly at the vendor in anticipation of being addressed. But looking at something ist different for Stargardtiens: When we fix things visually, we are actually looking askew. Since the condition primarily affects the visual centre, we have to use the edge of our eyes to see something and hence seem to look past it.
For the street vendor, it looks like I'm deliberately staring past him. As if I'm ignoring him. So he concludes that he can't sell me anything and turns to find someone else.
The trick does not work, however, when the street vendor approaches from the side - and I am already standing. When I'm on the move, I do it in a Swiss pace. And that is significantly faster than the Kenyan pace. The street vendor must then hurry to catch up with me.