Binoculars in the train station 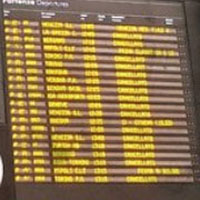 When I 'm travelling, I usually have some binoculars with me, especially when I move into areas I don't know well. I need the binoculars than to read street signs or house numbers. For others, this looks somewhat confusing, as I stand at very unusual places and watch something with my binoculars. On a hike, instead of looking at the view I stand with my back to it and look at the rock wall behind the tail because the signpost is standing there.

Another unusual place for the use of binoculars is in the middle of the city. Then I look for an address. For instance, I stand in a residential area and use binoculars to see if I have found the right road. Then I'll stop in front of a house and use the binoculars to read the house number. Usually, I have to do this several times until I found the right one. I imagine some residents are slightly amazed when they look out their living room window on the street to see some guy looking up their house with binoculars.

So far I have been addressed only once about this behaviour. That was at the main railway station in Milan. There I have to place myself in the middle of the entry hall to read the large panel, where departure times and platform numbers of the trains are listed. Because the platform number usually appears usually only shortly before the train is scheduled to leave, I have to take up my binoculars several times. Once I stood there and waited for my connecting train to be finally displayed when I suddenly found myself facing two officers of the railway police. They wanted to know what I'm doing with those binoculars. That was at the time when there were several bomb attacks on stations and trains, so I guess the police were therefore extra attentive. I explained to them my problem and my solution to it. The two gentlemen were very understanding and asked by radio their headquarter to provide me with the correct platform number, so I did not have to wait until the display was ready.