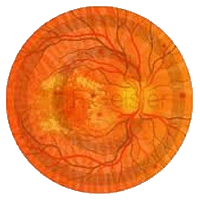 Stargardt's disease is a rare eye disease where the centre of the retina, the site of sharpest vision (macula), is affected. Since it typically manifests itself before age 20, one also speaks of a  juvenile macular degeneration.

In the eye's photoreceptor cells there's a dye that chemically changes when it is exposed to light. This change is picked up by nerves and forwarded as image information to the brain. To make the photoreceptor sensitive to light again, the used dye must be removed and replaced with a fresh one. This is done by a series of biochemical processes that are under genetic control. In Stargardt's disease, a genetic defect in causes this process to a fault and the used dyes can no longer be removed. They accumulate within the photoreceptor until it can no longer perform its task and fails completely.

Technically speaking, reducing the resolution of the eye. Although the comparison is misleading, you can specify the resolution of a human eye in Megapixel (MP): 575 MP (for comparison: an eagle has 1300 MP, a good digital camera around 20MP). Now my eye doctor now tells me, that I stand at 10% of what normally sighted people see, so I see with 57.5 MP. It should be noted that the concentration of photoreceptors decreases towards the edge of the retina,

Stargardt's disease has the effect that the centre of the visual field is blurred or completely blocked out . This leaves only the outer regions of the eye to recognize things. The following video  demonstrates it: