Looking at it by looking away from it 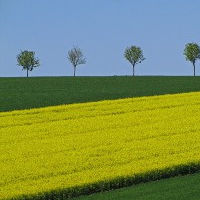 An effect of Stargardt is that it is sometimes not so clear who or what I'm looking at. If I want to fix something or look at someone, I need to specifically look next to it with both eyes to see anything. I'm cross-eyed with both eyes at the same time. If I look at the object of interest straight forward, it is completely gone and I do not see anything.

With things, this is less problematic, but with people sometimes it leads to confusion. For example, if I want to tell someone something and fix him or her so that I can see the face, it happens that, instead, a person next to the one intense reacts, because my eyes pointed more in that direction. The obligatory question then is:

- Are you talking to me?

That's why I try to always mention the name of the person with whom I want to speak (assuming that I know it). The effect also occurs in the other direction. It happens quite often that I'm with a group of people and we talk about something. Then someone asks me a question or makes a remark to which I should respond - but there is no reply from me. I'm waiting a moment to make sure that my neighbours have a chance to answer in case they were meant to do so. Because I could not deduce from the content of the question that I was the target of it.  I noticed that the speaker was looking in my direction but could not tell whom he or she was actually fixing.

And sometimes I forget that I actually look somewhere else when I look at something. So I sat in the train one time and watched the landscape passing outside the window. I thereby fixed the flat horizon line and observed how it moved up and down with the rolling hills, hopped over a building or a tree or was interrupted by an object close by on the railway line. Then I noticed the guy sitting opposite me was growing restless. I looked at him to see what was the trouble and saw how his surprised look calmed down and he relaxed. I realised that I had been staring right at him for several minutes motionlessly while I was actually observing the play of the moving horizon line outside the window. Understandably, he was a little uneasy about such rude behaviour. It was only when I turned my eyes away from him that the situation was at ease for him again. But from my point of view, I only started watching him at that moment.