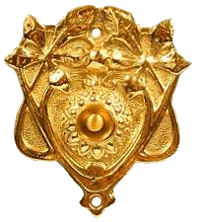 Here is a brief report about a little trip and what it has to do with cream cheese, elevator buttons and toilet signs.

Thanks to my smartphone and GPS I found the hotel relatively quickly, it was even clearly marked as a hotel on the outside. But already the registration form I had to refuse: It's amazing that the form-makers always manage to put three dozen specifications with lames in three languages on a paper as big as a postal card. The lady at the reception was a little surprised but then copied the details of my identity card to the form for me. I got the key to a room on the third floor and was lead to the elevator. A modern elevator with landing announcement and selection buttons placed about half a meter above the floor so that people in wheelchairs can reach them. Only that's a problem for Stargardians: I had to kneel to get the buttons at eye level and recognise the number 3. From the corner of my eye, I saw that the lady from the front desk turned again and looked back - and remained visibly perplexed. The doors closed and saved me from having to explain myself.

Since it was already a little late, I found myself shortly afterwards in the onsite restaurant to get some dinner. I was warmly welcomed and directed to a table - and then informed that the menu is printed on the tablecloth. And really, on the small tables were large sheets of paper on which I could recognise text. I asked for a menu in booklet form and got the answer, that there is none. The tablecloths menu is part of the concept of the restaurant. As the waiter has already gone I had no other choice than to clear glass, cutlery and decoration on the next table to be able to pull and fold the tablecloth in a way that I could apply my electronic magnifier and read the menu.

I order and ask for the restrooms: Down the stairs, then to the left and I stood in front of three doors. The middle said "Private" in big letters, on the side of the other two could see something like the letter i. For information? Fortunately, a gentleman came out of the right door and I knew where I belonged. Stepping out again I looked at the two I's from close up. And lo and behold, they differ. The bar at the gentlemen's door is wider at the top than the bottom, whereas the one at the lady's door is narrower at the top than at the bottom. The difference measured about five millimetres. I could understand the clever design idea, but in practice, it has failed. Well, the food was very good, and the waiter red the dessert menu for me.

The next morning, I wanted to start my breakfast at the buffet with orange juice. I took a glass and wondered how the juice dispenser machine works. A closer inspection revealed no clear hin, so I simply put the glass in the opening  - and got wet fingers in return. The juice began to flow immediately when the glass was placed in the opening. However, mine was not quite where it should have been. I settled for a half-full glass and sticky fingers for the time being . Next, I looked for bread, butter and jam. Bread is not a problem and jam and butter were in those small portions you often see in hotels. However, with my first bite into my croissant I realized that was no butter, but some cream cheese. Tasted somewhat strange with jam. The next morning, I tried one of the other small portions, next to the cheese spread from the day before: the packets were blue instead of green. Bad luck, another variety of cream cheese, I found the butter only on the third morning.