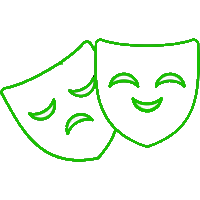 For Stargardtiens faces are difficult to recognise. It is usually already a challenge to figure out if the person is  looking at you or not. The distinguishing of facial expressions is only possible in particularly good light and only when the facial expressions are clear. This is an limiting factor when dealing with other people.