Adventures at the ATM 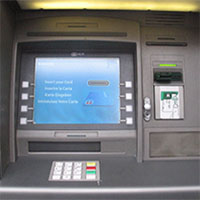 ATMs - here as representative for all other automates such as tickets, self-checkout at the grocery store, or check-in at the airport - have evolved considerably since their introduction. But despite all the improvements they are always good for surprises.

In the beginnings, ATMs were practically useless: the too small screens were badly legible not to mention the usability of the software. In addition, the arrangement of the keys on the numeric keypad was not always the same - and sometimes still is. On one ATM the 1 key is on the top left, on another, it's on the bottom left. Thus, it often happened to me that I wanted to withdraw 100 francs, but ended up with 700 instead. Meanwhile, the screens have become larger and the user interface has been improved and unified. Nevertheless, I do my transactions often without properly watching the screen, I memorized the processes. That makes me trip when suddenly another system appears on the screen. Once I was in a different region of the country and wanted to withdraw some money. The ATM I found was from a well-known bank, but a different brand than I was used to. The screen looked different, the user interface was unfamiliar. I navigated as carefully as possible through the functions and the machine offered me a 1000 bill instead of 100 bills. My next stop was a small restaurant, where I could hardly pay with such a big bill. So I put my card back in again and very carefully tried to lift 100 francs. And again ended up with a 1000 bill. No idea where that excess zero was coming from. I then visited some gas station store to buy something small and thereby change that bill.

There is a sure indication that a Stargarster is standing at an ATM: He pokes his head right into the wall, respectively in the niche with the screen. Recently I was made aware that this also has its advantages. It is not possible to look over my shoulder and spy out my PIN code. Even a hidden camera mounted directly over the keyboard would not work: There's always my head in the line of sight.