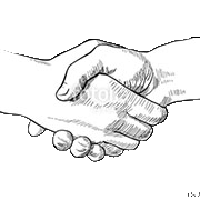 On many occasions in daily live eye contact is important. It signals attention, respect and sincerity. Or it signals the driver that I want to cross the street or the waiter in the restaurant that I want to pay. As Stargarster that is not quite as straight forward as it sounds.

So I have often trouble to draw the staff's attention to me in a restaurant or shop. They're usually so far away from me that I need to look strongly "askew" that I can make out where they are. Capturing their views then usually fails because they have already turned away.

A special situation in this respect is the greeting of a hitherto unknown person. I meet someone say at a conference or the person is presented to me, and we greet each other with a handshake. It is proper behaviour that you look that person in the eyes while greeting him or her. And I do this very consciously. Only that I actually look only in the direction where the eyes are located. Because I can't see them, even worse, I can usually only vaguely see the head of the person I greet - sometimes not even that. So I concentrate on making eye contact and thereby totally ignoring my new acquaintance  I then try during the following small talk to "place" some side glance so that I can see the face of he or him a little more clearly. This does not always work, for example, because we are not talking to each other long enough or because the lighting in the room is too bad. Then it may happen that I meet the same person again two hours later in the coffee break and do not recognize her or him. So we have to introduce each other once more.

What bothers me most about this situation is less the somewhat embarrassing situation at the second greeting, but that at the first greeting, an important moment, I'm faking something, so that I behave politely and according to the conventions. I'm cheating myself through the situation and don't even get something out of it.

Recently I read of someone who uses this effect to his benefit. If he needs to talk to someone that he doesn't like at all, he looks that person directly in the eyes - so at least he doesn't have to see the other person.