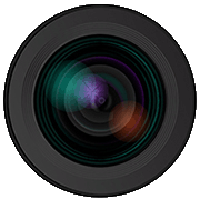 It seems strange at first glance that a Stargardter like me puts so much time and effort into photography. But I have learned to use my poor eyesight as a strength here. The fact that I see less, makes me see more of my subjects.

Photography is over long stretches a reductive process. It reflects the real world on a limited two-dimensional space. Hence you have to make a selection, the abundance of information has to be reduced. The old church is meant for the picture and not the modern buildings left and right of it. The birthday child should be in the centre and not lost in the crowd of guests unless it's just this crowd that you want to show. The gorgeous, sunlit mountain peak should not drown in the panorama. The easiest way to achieve this is to put the desired object full-frame in the centre of the picture. It is often overlooked that its position in its environment contributes to its uniqueness or its beauty. So it's important to get the environment to some degree also incorporated into the shot, Like this, the image does not look flat and dull. It's about the composition of the image, its geometric structure which can be determined by various lines and curves.

As Stargardter I'm several times in the advantage, at least in my imagination. First, already from the start, I do not see all the details of a scene, and therefore I am not distracted by them. I start sooner with the analysis of how the object is embedded in its surroundings. Secondly, I must look askew to see my subject to see it more or less clearly. My gaze wanders so several times over it, crisscrossing from various directions, and thus has already scanned the surroundings. It's not only about the physical environment but also how the light shines on it. And thirdly, I see a great deal in structures, surfaces and surface textures, which facilitates finding a good composition for a picture. Obviously, some good pictures slip through the cracks: Some subjects that others see I don't even recognize. I'm also reluctant to photograph people: I have already enough difficulties to recognize their faces as it si, to spot a nice smile through the viewfinder of a camera is impossible for me. And sometimes I discover afterwards in my pictures things that I have not seen on site, such as the electricity pylon in the forest. Once I have explained all this to a colleague. She said that my camera is something like a third eye to me: I can watch my pictures afterwards in peace and at a distance that suits me. An interesting notion - when I take it up like this I have about half a dozen third eyes.