The quiet ones are the dangerous ones 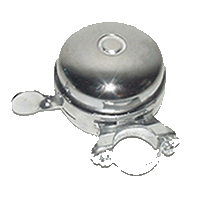 Obviously, traffic is a problem. I've given up riding a bike a while ago after I've overlooked and rammed a parked car. As a pedestrian, I've got a little more reaction time, because I'm slower. The basic problem is that an oncoming vehicle can be completely invisible to me if my blind spot happens to fall on it.

It then emerges suddenly about ten meters in front of me from me. Fortunately, I usually can hear it much earlier. Only electric cars are a little difficult in this regard because their driving noise is comparatively low. But then it's in a different pitch than the petrol engines, you just have to learn to listen to it. No, the real problem is the cyclists. The modern city bikes are so quiet that you can not hear them. The old bicycles, where the pedals or the apron chain scrape on something with each revolution or the old dynamo grinding on the wheel, have become rare. Cyclists are also much smaller than cars, I see them much later. So it happens sometimes that I want to cross a street and suddenly a bicycle appears seemingly out of nowhere when I'm one step into the road. Sometimes the rider complains why I couldn't pay attention. I sometimes like to reply that they must have installed by law a bell, why don't they use it? (In my country, using the bell or the horn is considered a bad manner.). But usually there's not enough time for that, they are already gone. My favourite kind of cyclists are those who use the sidewalk in the middle of the night because they have no headlight and therefore don't want to use the road. There's no chance for me to see them in time. And if they even complain about why I couldn't step aside and let them pass, I'm speechless and can just shake my head.