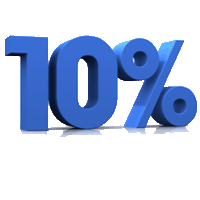 My eye doctor tells me regularly that my eyesight is at 10%. This is determined by the usual letters and numbers in various sizes, which are projected on the wall. Sometimes you can still see the panels with the many E's showing to the left, right, up or down. The largest are at the top, towards the bottom they are getting smaller. 10% equals the top two or three lines that I can still see. With my glasses, of course, without glasses, I don't see a thing on these panels. But what means 10% then?

I explain that sometimes in the following way:  I need to be ten times closer to an object, or the object would have to have ten times its size so that I see it as people normally do. For example, I don't recognise a friend ten meters across the road, he must be within a meter away of me so that I can be sure, who he is. Or the car on the street, which turns at 50 meters around the corner and I only see it when it has come within five meters of me. Therefore I consequently use the pedestrian crossing and follow the colour of the traffic lights; crossing the streets at random places is simply too dangerous to me. But the car is also a good example of how I compensate. I can hear it already when it turns around the corner 50 meters away. Fortunately, one has several senses (five, six, or twelve, depending on how you count), with which one can work.

The hearing obviously plays a central role when compensating for a poor sight. I guess that I cover 40-50% of my perception with my ears. This has earned me an acute and alert hearing sense, with which I often hear things that my fellow men do not (not yet or not at all) perceive. For example, in my student shared flat, I always could tell who's coming home by listening to the step on the wooden stairs. Or who has ever heard how snowflakes sound when the wind drives them over the snow-packed garden. Furthermore, smell and touch add to the mix, or if we take the concept of the twelve senses, how about the sense of space or the sense of movement? And sometimes a sixth sense kicks in when I exactly know that a particular person has entered the room although I have either seen nor heard him or her.

All in all, I'm probably at 60-70%, with perhaps 25% perception of things that so-called normal vision people do not perceive as immediately as me or even not at all. This is my slightly different perspective on the world. By the way, my eye doctor has told me at my last check that I'm now up to 12.5%. I reacted with surprise and she hastened to tell me that was up to the new eye test system. The old was measured in steps of 5%, the new system is doing this now in steps of 2.5% increments.