With a bowed head 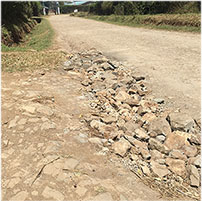 I recently noticed that the majority of the time I am walking around Nyahururu with my head bowed down. This has nothing to do with my state of mind, rather the nature of the ground demands my full attention.

Because the potholes or thresholds are everywhere. And since they often change their position, I have to constantly study the ground in front of me carefully so as not to stumble or get my feet wet - when the potholes are filled with water. It is normal for potholes to form on dirt roads, especially during tropical rainfalls. And since the water somehow has to run off, new gutters and channels are constantly being created. Every now and then someone fills in the holes and gutters so that new ones can emerge elsewhere. Remarkably, the fillings are not made smooth, but rather as small mounds. When enough people have walked or cars have driven over them, the little bumps flatten out on their own. For me, that means that I not only have to watch out for holes but also small mounds where I can poke my toes. Or get a load of sand in my sandals.

One way out is to use the paved areas as much as possible - if available and the traffic allows it. And unfortunately, the asphalt is not immune to potholes either. These are also filled up with gravel from time to time. Sporadically they also get a new layer of asphalt on top. Recently this happened at my favorite intersection, the one point where I can safely cross the main road. The reason for this was some particularly large holes that often forced the vehicles into the other lane, which seriously disrupted the flow of traffic. The repair was sponsored by a local bank, which then put up its sign at the intersection. It's a shame, I liked the big pothole: it forced the vehicles to practically stop in front of the intersection, which made the crossing easier for me.

So I'm very familiar with the local ground geography. I noticed this when we recently drove at a walking pace - due to the traffic jam - through the streets on which I usually walk. I was finally able to look at the fronts of the houses in peace.