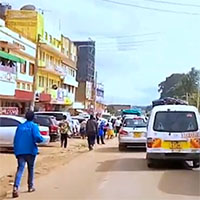 I've been here in Nyahururu for two years now and sometimes I still get the question of how I dealt with the culture shock. My answer is usually: Sorry, but I didn't encounter that one yet. Now I've found out how a culture shock expresses itself and read things like "Adaptation to the unknown", "Feelings of insecurity" or "Orientation systems". Doesn't that sound like Stargardt?

Of course, personality and character play a role - and certainly also the type of reception in a foreign country. But I see clear parallels to situations in which a Stargardtien finds herself/himself again and again, whether at home or abroad.

I am always ready for the unknown: Be it a new construction barrier on the way to my bus stop in Switzerland or the new water-filled pothole in Kenya. Sometimes I run into it, sometimes I can just avoid it.
I often cannot fully understand what is happening: I'm with a group and suddenly there is great laughter. I try to guess what it's about from the context, but finally, I have to ask. In Switzerland I simply did not see the strange behavior of a passerby on the other side of the street, in Kenya, I am missing a cultural detail, such as why you throw water at birthday children.
I keep wandering around in circles: From the baggage claim area of ​​the Roman airport, I follow the signs to the S-train, only to find myself again at the baggage claim area 10 minutes later. (The second attempt to get to the train station worked, but I have no idea why.) In Kenya, I come out of the big shopping center in Nairobi and start walking towards my accommodation - and find myself 15 minutes later in front of the same exit where I left.
I feel completely left out: I go for a beer with friends and there is football on the TV behind the bar. At some point, the conversation inevitably turns to this topic. I can't contribute anything, I can see neither football nor players, so I've never developed an interest in this sport. Incidentally, this happens equally in Switzerland and in Kenya.
So my thesis is: As a Stargardtien, you are a little immune to culture shocks because your home country is equally full of unknowns, incomprehensible, and surprises. And you learn how to deal with them.  As a Stargardtien, the little things are less of a concern because they are often invisible anyway. This also applies to small cultural differences. With Stargardt, you learn to take this more calmly.