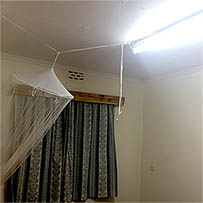 As a Stargardtien, you develop a feeling for light. You will immediately notice differences in light or insufficient lighting. For me, the question arises whether there are also cultural differences.

The first time I noticed that the awareness of lighting is different in Kenya was when I arrived in Nyahururu: I entered my bedroom and found a neon tube mounted on the ceiling. The room was as bright as day. That made unpacking and putting away my things comfortable, but it's less nice when you want to go to bed. And it becomes really uncomfortable when you want to get up briefly at night and are blinded by 280 lux. So I immediately started looking for a bedside lamp - which was surprisingly difficult. I couldn't find anything in Nyahururu, after two shops in Nairobi - without success - I was fed up with racing around and I turned to online retailing, where I found something. Next, I swapped the cold-blue LED light from the living room with the warm version in the kitchen. It is much nicer to sit in front of the fireplace with a light that goes well with the fire itself. I found out that in many private houses the lights sit in simple sockets directly on the ceiling; hanging lights with lampshades seem to be rare. Which led me to my next project for my living room.

The light intensity is often also quite modest, even in shops: the supermarket that would be closest to me is simply too dark for me. It's a big high hall with some neon tubes screwed to the ceiling. I prefer to go to the other supermarket: There the hall is even bigger but has skylights that let in the daylight. And the lighting hangs over the shelves.

The question now arises to me whether this is my Stargardt speaking, or whether the lighting culture in Kenya is different.