What is a full cup? 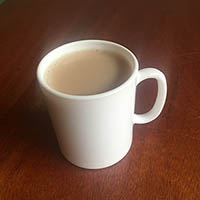 The views when a cup is full are different in different cultures. I found out that as a Stargardter I can get into an insoluble situation when filling a cup.

As a child, I was taught that the cup of coffee or tea for a guest should not be filled to the brim. It could be that the guest wants to add milk or sugar to it and still wants to stir vigorously. In addition, a cup that is too full increases the risk of spilling something when lifting it. And you want to spare the guest this little embarrassment. The liquid level is, therefore, a finger's width below the brim of the cup.

Well, in Kenya it's the other way around: It's considered rude, if not grossly offensive, to offer the guest a cup that's not filled to the brim. Such conduct may be construed as stinginess or contempt on the part of the host. Fortunately, that was quickly explained to me and I can adapt easily. But filling a cup is already a challenge for Stargardtiens. If the contrast is reasonably high, it is relatively easy, for example, coffee in a white cup. If the white margin over the coffee gets too narrow for me to see, I stop the pouring and the cup is certainly not overfilled and the guest still has space for sugar or milk. The favorite drink of the Kenyans is the chai, a half-half mix of milk and black tea. The contrast between liquid and cup is quite small, depending on the mixing ratio: light brown to white or dirty white to white. So, filling to the brim is a problem with a very high risk of overfilling and spilling. I am now faced with two choices: Either I appear as a rude host because I pour too little or as a clumsy host because I spill.